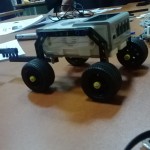 I had to attend in beta workshop called Droid-Scrum who was organized by company Octigo with cooperation GeekGirlsCarrots.

Workshops were advertised as a new entrant on the Wrocław;s market with practical knowledge of scrum by using lego bricks. For this workshop was allocated 3 hours (the full version have a two days of workshop)

Goal of workshop can divine into three part:
1. Theory
2. Let to know a bricks (how we later saw, this was a “0 Sprint”
3. Scrum in practice

The introduce to Scrum and Agile hold on about an hour. So long, too long. I seem, that in practical workshop of Scrum is need to know a minimum of theory and next everything to know about Scrum is get to know by practically, not theoretically.
Here my attention paid slaid, who was language mixed – some in Polish, some in English. Additionally, a speakers was not prepared from technical site. The size of picture on slides was too small (in end of auditorium an attendee didn’t saw anything). They also didn’t know how to make a full screen at Adobe Reader. But.. Maybe in Mac it not working (I don’t have Mac, so I don’t know that). But after notice by attendee (yes, the girl-attendee) that they can make a full screen by press Crl+L they said, that this not work like she think and it’s a waste of time..

After theoretical Scrum started explanation of rules:
Problem: A walkway has collapsed in a mine. Fortunately, no one has died or been injured, but there is no possibility of early release of the miners. It turned out, however, that something small and smooth can squeeze through the rubble. For example, the walking robot could provide the isolated people with water, food, flashlights and means of communication. The board of the mining company quickly established a team whose goal is to construct such robot. Due to the pressure on time and high level of uncertainty of the project it was decided to choose the agile approach for this purpose. The problem is not only unknown technology, but also unpredictable conditions underground. The team’s objective is to build a robot that will reach the end of the sidewalk and will carry needed articles to the trapped miners..

At practical part of this workshop we had a two teams. In both teams was apportion a one mentor, who had to show us, how is looking scrum. But in time of translation of rules both teams was treated unequally. We must only stand and listen (because our mentor wanted to keep our mind on himself) and second team started to know what type of blocks was given to this game.

Finally, started “0 Sprint”, where step by step our mentor show us, how sprint works. So we get a guidelines, that means robot need to have:
– rubber soles,
– antenna length of two inches,
– have a gap (between the bottom and the ground) one centimeter,
– stand stably on four legs,
– have a blue colour.

Because we had a little pieces of blocks with blue colour, we convince the “client” (our mentor), that only antenna was in blue colour. Rest of tasks was easy, so we finish our robot in 7 minutes and everything was comply with specification.

At introspection we saw thinks like:
– No communication – most of us started do something to make a task closed as soon as possible.
– No conversation – how we need to start together with task?
– No scrum master – or person, who will keep an eye on task and people and that all team works efficiently

We decided that one of us started to be a scrum master and she will get to people tasks and care, that everyone do something.
And started “1 Spring”
This time robot should have:
– six legs
– rubber wheels
– tracks
– drive over obstacles
– four legs
– … (and some other thinks, what I don’t remember now)

There was a lot of requirements and a little time to read all tasks and get a discussion about it – what we need to do, what first, what last, what client think about it..

We quickly decided to get only tasks with highest priority what client gave us with specification. And at this time started a human factor – our scrum master don’t had a power to everyone listen her. There was a one person, who wanted that everyone do how she said, but she didn’t want get a responsibility of that. Anyway, everything what we build in “0 Scrum” we destroy, because at “1 Sprint” we needed to build something new. And we didn’t finished this sprint.

And at that time workshop finished. It was a 8.00 PM and exactly time, where 3 hours go by (no more, no less)

This workshops was advertise as a scrum not only for IT. In my point of view I don’t see that scrum can start from other way then from programmers// but business also can make their thinks compatible with scrum and press programmers.. but this will effective?

I wanted to saw at this workshop a ideal scrum. But I saw only:

– in every society there are people who dominate, not taking responsibility for their decisions
– it is important to carefully examine the subject, and not throwing up at what business wanted
– communication and active listening is the only option for the project to work well