The Artificial Intelligence term is not new, but its definition changes since the first use it.

Alan Turing created the first paper about AI in 1950: “Computer Machinery and Intelligence”, where he tried to answer the question “Can machines think?” – and based on that Turing Test term was well known as a method for determining if a machine is intelligent.

From that time, there was a lot of changes, where people played around the algorithms and writing different programs with intelligent behaviour, such as playing chess or automatic translation. New programming languages were developed to create more clever programs such as PROLOG (1972) – the first logic programming language or MATLAB (1984), software to accelerating engineers and science.

Artificial Intelligence is a system that can learn from data and based on that, decide to achieve a specific goal or task using Machine Learning. Natural Language Processing, Speech, Vision, Robotics etc.

AI is an entire field dedicated to making machines smart. AI is an umbrella for all intelligent algorithms.

Machine Learning is a division of Artificial Intelligence. ML analyses, understand and identify a pattern in the data, such as recognise text, recognise voice etc.

There are two main types of Machine Learning:

Deep Learning is a subset of Machine Learning and Artificial Intelligence. It’s using Artificial Neural Networks that was created based on biological neural networks in human. It’s using multiple layers to extract higher-level features from the raw input progressively.

Artificial Intelligence, Machine Learning and Deep Learning are techniques to help you create an intelligent program. 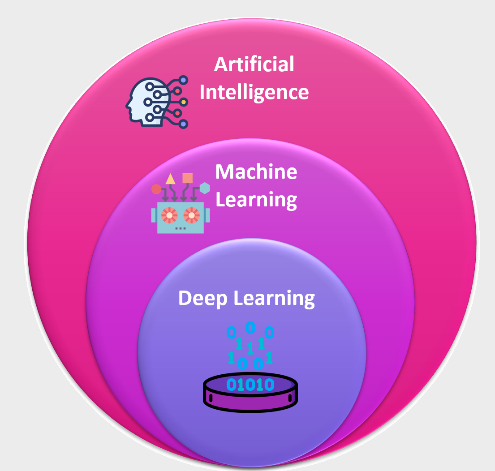